Let's Build a Game with Rust

This is the outline for a talk I gave at the Seattle GNU Linux conference (SeaGL) 2020. Once the video is posted I will link it here.

The code for this post can be found at https://github.com/pop/lets-make-games-with-rust

The community is pretty good too!

This post is about bringing those two interests together. Let's learn how to build a videogame with the Rust programming language.

This post is for folks who have a passing familiarity with Rust. If Rust is new to you, you get a little confused.

You're a smart cookie though, I'm sure you'll keep up.

Games are an incredibly fun and flexible type of project to work on.

You could write a whole book on game programming patterns (and somebody has, links at the bottom). Today we're going to talk about one popular pattern: ECS: Entity Component System. Here's what that looks like:

Pieces of data mixed, matched, and queried on.

Example: Some components needed to simulate physics might be "Mass", "Movable", and "Friction"

A Unique ID associated with a collection of Components.

Example: Potted plant you can break have the following components:

Each of these components are reusable. Instead of creating a "PottedPlant" class in code, we can define each entity in a config file like this:

This makes our engine much more reusable and separates our content from our logic.

But how do we use these components?

Functions that operate on entities with specific components.

A System queries for all entities with a specific subset of components and does some transformation on it.

This is nice compared with a classes-based approach where we would need to manage inheritance to manually make sure everything interacted correctly. Here we define systems based on what features an entity has. The resulting systems and components interact with eachother in interesting and potentially unexpected ways.

ECS is a popular pattern for creating interactive games and simulations. Engines like Unity have some ECS patterns built in, and almost every big game engine uses ECS in some way.

Of course ECS isn't a silver bullet, but for this blog post it's good enough.

C and C++ are very popular languages in games programming. They are defacto in the industry and many large engines, both internal and licensed engines, are written in C++.

I'm not here to bash on C and C++, but it can be useful to point out why you would bother using Rust if the norm is C++.

The usual arguments in favor of Rust go a little something like this:

So why does this all matter for games? I think of it it like this: Any project when it gets sufficiently complex benefits from Rust. Rust, by preventing a whole class of memory bugs, makes it easier to maintain a complex codebase over time. It might not be life or death, or as mission critical as security software, but completely avoiding null-pointer bugs, at essentially no performance cost, sounds like a huge weight off my shoulders.

Games are by their nature huge and sprawling codebases. Many bugs in games are caught by a compiler, but even more errors would be caught by the Rust borrow-checker. And being able to use some of the nice functional-programming features would be nice too.

Of course Rust is a relatively new language so your mileage may vary. If I ran a big game studio I don't think I would throw out my C++ code and start fresh with Rust, but I would definitely put some research and development into it for new projects (said the Rust fanboy).

Writing games in a safe, expressive, not C/C++ language sounds great; where do I start?

You could write a game from scratch, but there are engines written in Rust you can use today! Some of these focus on ease of use, some are for 2D games, some focus on compiling for the web. Most of these engines require you to write Rust, as opposed to using a GUI, but even that is changing.

You could write this talk for almost any Rust Game Engine, but my personal favorite is Amethyst, so we'll use that. Amethyst has a solid API, very active community, and is a good mix of flexible, convenient, and powerful.

Amethyst checks off a few other boxes:

In this step we're going to get Rust setup and create a "hello world" rust project.

If you haven't already, setup your Rust toolchain and start a Rust project.

Now we have a "hello world" Rust project we can start building on.

Before we run, we need to walk. And before we walk we crawl. And before we crawl we draw a window. This is, of course, a little harder than just asking your computer "Please draw me a window".

First we need to add a bunch of imports to our project:

This is every dependency we will need for the entire project, so if cargo build|run complains about unused dependencies, don't worry... we'll get there.

Here we are including a few useful

Then we need to add some boiler-plate to our main function:

That won't compile because we haven't defined our SeaglState.

We will add some methods to SeaglState later, but for now this makes Rust and Amethyst happy enough to compile.

But if we run our code we get a wonderfully cryptic error message:

We get errors like this when we have an unhandled exception in our code. In our main function, that is any place where we call a function with a ?, e.g., foo(...)?;.

TLDT (Too Long Didn't Troubleshoot) this is because we haven't created our display config file!

Now when we cargo run we should get a wonderful orange window: 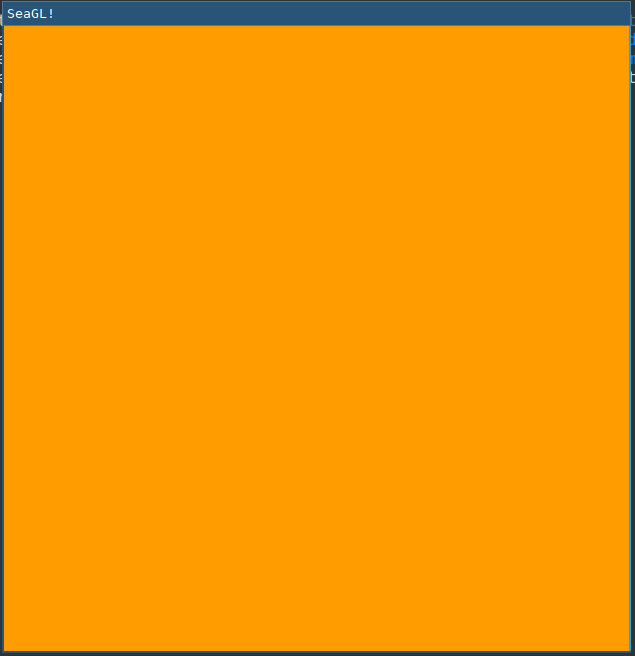 Alas, we have a window but no game! Let's draw our first character to the screen.

Did you know that SeaGL's mascot is named Patch? https://seagl.org/news/2020/09/10/naming-contest.html

First we'll create a Component for our Seagl.

Next we'll create a Seagl entity.

This is a good start, but our Seagl is a spriteless ghost!

First we need to load the spritesheet into memory. Add this in our on_start function above where we added the seagl:

Hmm. It seems like our Seagl Component isn't registered with Amethyst. This happens implicitly when we add a system that uses our component, but until we write a System, we'll have to explicitly register our Component with Amethyst.

Add this toward the top of our on_start method:

Ah, a different runtime error. This time we forgot to add our spritesheet image and spritesheet config file. Lets add those.

Add this code to a file in assets/texture/spritesheet.ron:

And save this image to assets/texture/spritesheet.png:

Now if we run cargo run we get the same blank orange window. This happened because we forgot to add a Camera to the scene!

Add this to the end of our on_start function: 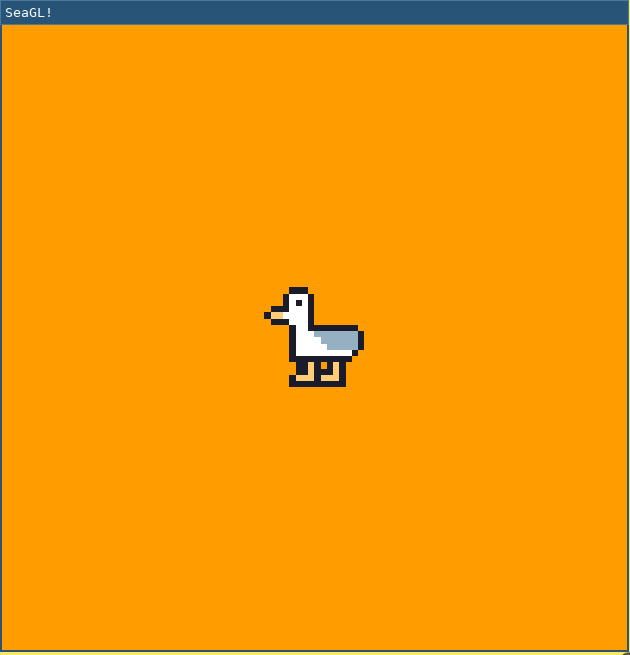 Thinking back to our ECS discussion, we have two of the three ingredients: an Entity, some Components, but no Systems!

First, we need to create a System struct and implement System on it.

Our System's run function looks like this in psuedocode:

This doesn't look _exactly_ the same in Rust, but it's pretty close.

We declare a SystemData type which is a tuple of components. The Transform component will be modified, so we require it as mut, but everything else is Read for stuff that Amethyst provides and ReadStorage for things we created.

We loop over every entity with the Seagl and Transform components, then we match against any user input:

We have a dependency on the input_system, so Amethyst will ensure that system runs before move_system.

Next we need to create a config file for our movement bindings. Instead of hard-coding "Up arrow means move up, down arrow means down" we put that in config files:

This is a good start, but you'll notice the Seagl doesn't turn left and right, this _totally_ breaks my suspension of disbelief so we're gonna need to fix that in our run method:

In our "horizontal" check we added:

This makes it look like our Seagl is facing the direction they're moving which should help boost our Metacritic score when we publish this at the end of the blogpost.

We rotate by PI because our 2D sprite is in the 3D world and we're rotating it in radians.

I'm sure we could all get _minutes_ of fun out of moving our seagl around the screen, but this game could really use something else... Something tastier.

This will require us to do everything we just did, again:

First we need to add a food Component.

It's structurally identical to our Seagl, but with a different struct it's a totally different component.

With a Food component we can add our Burger entity. Add this code to our on_setup function at the end:

We spawn the burger at z=-1 to ensure the Seagl sprite is closer to the camera and thus is drawn on top of the burger.

Have you ever seen a Seagull _behind_ a burger? That's ridiculous.

A few exercises left to the reader:

I've only covered enough in this post to answer the first two.

And finally an "eat" system.

This is a bit of a hack. If this were a real game we would keep track of how many burgers the Seagl ate, but for this demo, we'll be lazy:

And last but not least, we need to register this system with our game:

We did it. We made a lil' game. It had a Seagl and a burger. And we had fun making it.

I wouldn't say it's easy to make games in Rust, but we are very far from having to write games from scratch.